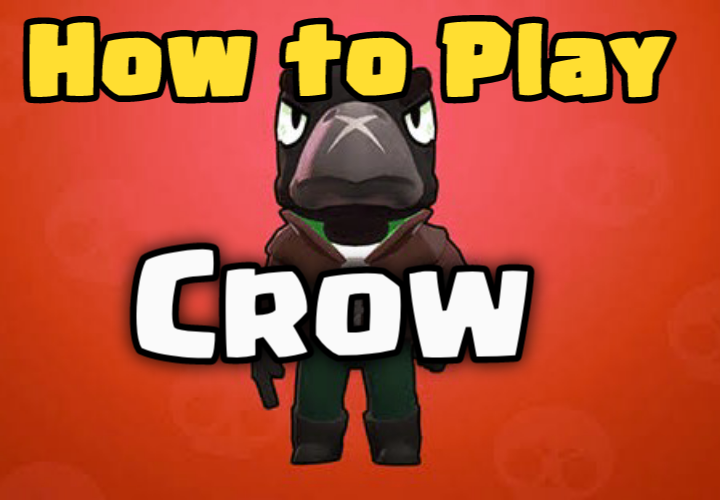 I've wanted to write a comprehensive guide about Crow for quite some time because he's one of the few legendary brawlers in Brawl Stars and has some really unique things to keep in mind when playing him.

Therefore, I wanted to provide you insights into the mechanics of how to play Crow well in Brawl Stars and how to utilize his full potential rather than just listing you some raw figures and copying lines from the description.

Crow launches three poisoned daggers. He leaps as a Super Move, launching daggers both in the air and when he lands. When we discuss Crow, we are referring to the fighter in Brawl Stars who has the second-lowest health and doesn't deal the most damage.

Yeah, it sounds like a terrible brawler. No. In actuality, he will compensate for it by having the fastest speed, a good range, and poisoning his opponents to slow them down and, most importantly, prevent them from healing.

Crow would always put foes under pressure and grind them down while he could brilliantly dodge enemy brawlers if you compelled me to describe my experience with Crow in one phrase. That's pretty much it.

You can win close-range wall-hiding battles (one brawler on each side) by using your speed as your best weapon. This makes Crow so strong since it allows him to easily escape challenging circumstances.

Crow is also excellent for pursuing thrower brawlers like Dynamike or Barley because you can easily avoid the dynamite or bottles with your speed and catch them, or you may jump with your super over a wall to capture them. In other words, they have virtually little chance of escaping your grasp.

As a result, if you play as Crow, you must have patience and accept that you will hunt down other brawlers over a longer period of time in 1-on-1 situations rather than just stroll into them. Your health will demonstrate that this is a bad idea and that you have little chance of surviving a close-range 1-on-1 with nearly all other brawlers in Brawl Stars. While using crow, you should be patient, attack them whenever you can while dodging their shots, and keep your poison on them, so they don't heal back up.

Speaking of his ability, many brawlers make a strong attempt on other brawlers while using their super. In my opinion, Crow's super serves two purposes:

1. To scale walls to pursue throwers (you will prevail in a one-on-one close combat situation in this).

2. After you have managed to damage other brawlers, give them the last few blows.

So, to eventually defeat a brawler, you will need your super, and it will be prepared since you will be hitting them much more frequently to down their health to the point where your super will be powerful enough to defeat them. Some high-damaging brawlers can take you out in a few blows, so avoid them when possible, even if you are full on your super. Try to get their health low with your poison.

Significance of Crow in Your Team

One of the greatest modes for Crow is the single showdown, which has lengthy 1-on-1 encounters where you have the time to gradually reduce the opponent's life before killing him while having the ability to flee quickly when a scenario becomes too difficult to handle (e.g. other brawlers join the situation). Additionally, if you have poison on a brawler hiding in tall grass, you will expose their location so that other brawlers can kill them.

You have two roles in team modes like Brawl Ball, where Crow is also quite good:

1. Running away from the tanks while keeping your poison on them to prevent them from healing will keep the tanks under strain.

2. Regardless of whether they are hiding behind barriers or not, use your superpower to take out single brawlers quickly.

Your squad will get a lot stronger if you stay in that role.