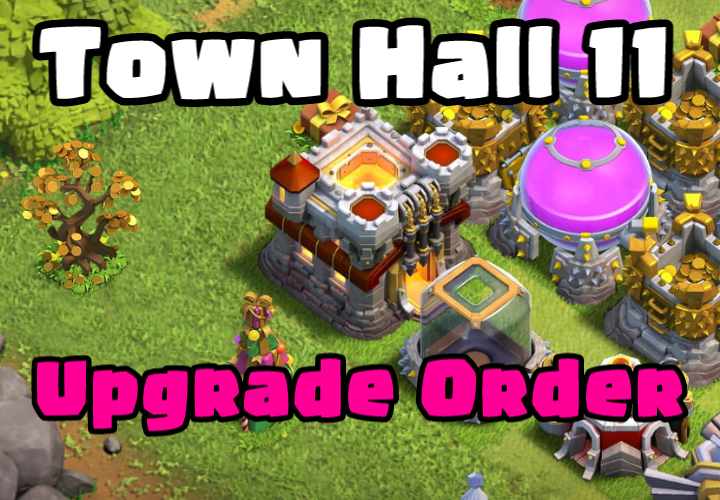 Town hall 11 is a fun town hall level that unlocks access to Grand Warden, the electrifying Electro Dragon, and the icy Ice Golem. If you reached TH11, this means you remained steadfast and now you are one step closer to fully max-out your base.

Let's start with getting the Grand Warden. The first thing you should do as a TH11 is to get the new hero. Grand Warden is a mighty wizard that can do wonders in battle. He can make your troops invincible for a few seconds with his Eternal Tome Ability. Luckily, upgrading your town hall gives you a boost on your heroes. You will have a level 6 Grand Warden for the next 5 days.

You also get one cannon, one archer tower, one wizard tower, 25 walls, one X-Bow, Eagle Artillery, and a few traps. You should keep one builder busy on these new buildings and take them to the same level as the older buildings.

Our spells and troops can be made harder, better, faster, and stronger by the wizards in the laboratory! The laboratory is always on the top of our upgrade priority list. You are going to need more robust troops to take on the fellow TH11s.

Gold storage upgrade is another important thing to do as a new TH11. You should finish upgrading all of your storages as early as possible so we don't have to worry about storage problems when we start upgrading our defenses. You will be investing 1,500,000 elixirs and 3 days on each gold storage taking a total of 12 days and 6 million elixirs.

You can increase your total troop housing space to 260 at TH11 by upgrading all of your army camps. Each army camp is going to take 6,000,000 elixirs and 9 days to upgrade. It is recommended to use all of the free builders on your army camps if you are done with the upgrades mentioned above.

Clan castle can be upgraded to level 7 at TH11 costing 8,000,000 elixirs and 9 days. A level 7 clan castle gives you access to an extra spell slot. This might not look a lot but an extra spell can make a difference. You can now bring spells that take 2 housing spaces, i.e Rage Spell.

The sixth level of the Spell Factory unlocks the Invisibility Spell, the seventh and last Elixir spell accessible for Town Hall 11. It enables any offensive or defensive unit within its radius to become invisible and impervious to attack until they leave the radius or the duration expires (with the exception of Walls and Siege Machines). Spell factory upgrade requires 4,800,000 elixir and 7 days to complete.

The Electro Dragon uses chain lightning attacks that can strike up to four targets after the initial strike, each of which deals 20% less damage than the one before it.

The upgrade of each barrack will cost 4,000,000 elixirs and 6 days to complete. It is recommended to upgrade only one barrack at a time.

When the Dark Barrack is upgraded to level 8, a new troop called the Ice Golem becomes available. Ice Golems are effective tanking troops with high hitpoints relative to their housing space and minimal damage. Their strikes slow down the target they are attacking, cutting the fire rate of defensive structures or troops by 50% for two seconds.

The Ice Golem freezes everything in a wide area when it dies, rendering all defenses and enemy troops trapped there entirely immobile without dealing any damage. You are going to need 4,000,000 elixirs and 9 days for this upgrade.

It's time to work on our mighty new hero. Grand Warden is the second strongest hero on my tier list because of his Life Aura and Eternal Tome Ability. Grand Warden makes nearby troops invincible for a few seconds when you pop his ability.

Let one of your builders upgrade your Archer Queen so you can get better in wars. You are going to need a lot of dark elixir for both of your heroes so keep clashing.

Barbarian King's ability makes him rage and spawns a lot of barbarians to help him take down whatever he wants to. I would recommend keeping a builder busy on Barbarian King so you can max him out faster.

Eagle Artillery is a defense that unlocks at TH11. Eagle Artillery has the biggest attack range in the game but it activates when 200 housing space of troops are deployed. You would have built Eagle Artillery already by now and it's time to upgrade it to level 2. Upgrading your Eagle Artillery will cost 10,000,000 and it will take 10 days to finish.

Inferno tower is the defense with the highest damage when set to single target mode. You must keep Inferno Tower on top of your defense upgrade priorities because it deals a lot of damage and helps in defending against Electro Dragon attacks that are pretty common at TH11.

You can upgrade Inferno Towers twice at TH11 which makes them a nightmare for attackers.

X-Bows is one of the main core defensive structures. A loaded and strategically placed X-Bow will overwhelm attackers, but for maximum effect, it should not be deployed as a front-line defense.

Being the damage-dealing defensive with the second-longest range, it is ideally positioned behind all other defenses, usually in the middle of a base.

Air defenses are a nightmare for air attacks. Electro Dragon attacks are pretty common at TH11 and without upgraded air defenses, you won't stand a chance against those Electro Dragons.

The Air Sweeper is a defense that fires air blows at air units. It does no damage but still, it helps a lot in defending against air troops. Air Sweeper can make enemy Electro Dragons and other air troops go the wrong way, making all of their planning useless.

Hidden Teslas are the strongest trap in Clash of Clans. Hidden Teslas deal a lot of damage to both air and ground targets and they have a quick fire rate which helps them wipe out low hitpoint troops in seconds.

Wizard Towers deal a good amount of splash damage to both air and ground units which helps them wipe out a lot of low HP troops. Wizard Towers are also the key to defending against hog and miner attacks so put some effort into your Wizard Towers.

Bomb Tower's ability to deal plenty of splash and death damage gives them a higher spot on our priority list than Cannons or Mortars. Bomb Towers can help you defend against Hogs, Miners, and other troops that are deployed in swarms.

Cannons have high damage per second and a good fire rate. Cannons play their role in defending against ground attacks, especially wall breakers and Golems.

Mortars are always on the bottom of our priority lists because of their low damage but this doesn't make them useless. Mortars are a very good tool for defending against Witches if you position them well.

All of these resource mining buildings should be upgraded at the end because they don't provide a good amount of resources for a player to rely on them.

You should always be upgrading traps and walls at the end. Walls can help slow down the enemy and well-placed traps also play a good part in defending your village.