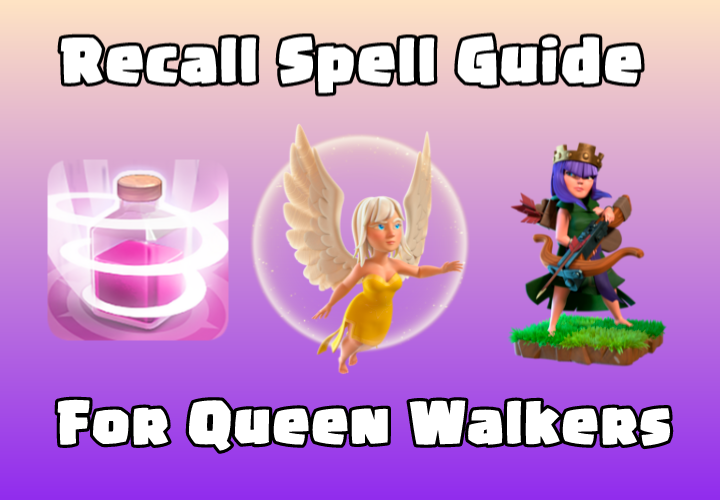 Clash of Clans added The Recall Spell to the game a few days ago, and many players wonder how to properly use it in their attack strategies. This guide will mainly focus on using Recall Spell in Queen Walk attacks, but you can apply the same logic in whatever attack strategy you like.

Recall Spell can be unlocked at Town Hall 13 but can be requested in Clan Castle at Town Hall 11; this makes it easier for Town Hall 11 and Town Hall 12 players to execute their Queen Walk attacks properly. Recall Spell can send a certain amount of troops (in its radius) back to the deployment bar. The recalled troops keep their current hitpoints when they are deployed again.

Recall Spell can also be used on Heroes and Pets, making it much easier to funnel your Heroes. Siege Machines cannot be recalled right now though it might be possible to apply Recall Spell to Siege Machines in the future as it makes a lot of sense. Now let's look at the statistics of Recall Spell from Clash of Clans Wiki.

The Recall Spell has 4 levels and can be maxed out at Town Hall 15. Recall Capacity means how many troops we can recall with each spell applied. Recall Spell has a recall capacity of 72, 78, 84, and 90, respectively. We will be focusing on recalling Archer Queen and Healers, so here are the "Recall" Housing Spaces our troops are going to use:

You should bring five Healers with you in your Queen Walk attack, so in case you lose a Healer or two to the Air Mines, you still have three Healers left that you can recall. If you have to use a Recall Spell and have five Healers on the battlefield, you will have to leave two Healers behind.

As a Town Hall 12, you can have a level 3 Recall Spell in your Clan Castle with a Recall Capacity of 84. This is the perfect math for Recall Spell, as you can recall four Healers and Archer Queen (4x Healer + Archer Queen would make up a recall capacity of 81). It is recommended to use five Healers with your Queen Walk attacks at Town Hall 12. You will lose one Healer, but four healers can keep your Queen alive.

The new Recall Spell opens many possibilities and opportunities for Town Hall 13 and 14 players. It wasn't an easy job to take on a fellow TH13 or TH14 before the update. The addition of this new spell made things a lot easier.