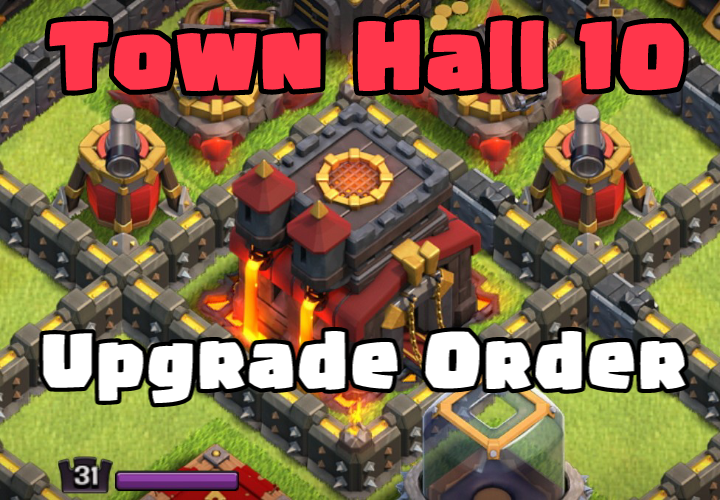 TH10 is a fantastic Town Hall level that gives you access to Inferno Tower, Bowlers, and Miners. TH10 is considered the most challenging town hall to attack if it is maxed out. Most players don't know the correct order of upgrading their Town Hall, which slows down their progress.

There are no storage upgrades needed at TH10, which is a good thing because we don't have to worry about upgrading our storages. If you follow this upgrade order, you can max out your TH10 in 3 to 5 months (depending on your playtime, and buying a gold pass also speeds things up).

As a new TH10, you get the following new buildings:

It is recommended to use only one builder on these upgrades and take them to the same level as the older buildings. You don't need to upgrade your Inferno Towers right now; just build them; we will work on them later.

Your village's laboratory can be upgraded to level 8 as a TH10. The upgrade will cost 1,500,000 elixirs and two days to upgrade. The laboratory is always an important upgrade and should be upgraded on day one. It is advised to use a magic book on your laboratory if you have one.

Laboratory gives you access to better new troop levels, which will help you successfully attack other TH10s. TH10 attacks are tough, and you need better troop levels to succeed in wars.

Clan Castle is an important building with a high upgrade priority at every Town Hall level. At TH10, your Clan Castle can be upgraded to level 6, costing 5,000,000 elixirs and taking 6 days of build time.

Your troops report to the Army Camps when they have finished their training. You can upgrade all of your army camps to level 8, increasing your village's troop capacity to 240. Each army camp will cost 3,000,000 elixirs and 3d 12h to upgrade (14 days in total).

Using as many builders as possible on your army camps is recommended. If your builders are done with the laboratory or Clan Castle, use them to upgrade the other two army camps.

Upgrading your barrack at TH10 will give you access to Miner. The Miner is the twelfth Elixir troop unlocked in the level 12 Barrack. When not engaged with enemy troops or structures, the Miner, a single-target troop, digs tunnels underground, bypassing enemy traps and walls.

Miners don't have a particular target. They attack the nearest buildings; however, if enemy Clan Castle troops, Heroes, or Skeletons are in their range, they prefer attacking them. Miners are the key ingredient of the Hybrid Hog-Miner attack strategy, which is the current meta for TH10 and higher THs.

When you finish the above-mentioned upgrades, you should keep a builder busy on your barrack. This upgrade requires 2,500,000 elixirs and four days to complete.

The Bowler is a warrior who launches a heavy boulder that bounces and deals splash damage when it first bounces and when it lands. You can unlock The Bowler by upgrading your Dark Barrack to level 7. The upgrade requires 3,000,000 elixirs and 5 days to complete.

Bowlers are used in a lot of attack strategies. You can pair them up with Golems, Witches, or Pekkas. Unlocking bowlers will give you a lot more variety in your attacks as a TH10.

You can upgrade your Spell Factory to level 5 as a TH10, unlocking Clone Spell and increasing spell storage capacity to 10. This upgrade will require 2,400,000 elixirs and 5 days to complete.

The Clone spell does exactly what its name suggests: it clones any troops that step into its radius. The duplicate troops have the same level as the original troop and show up fully healthy. They have a finite lifespan and are vulnerable to early elimination by defenses.

The fifth and final Dark Spell, which requires a level five Dark Spell Factory and a level ten Town Hall, is the Bat Spell. This spell, when used, gradually summons a number of bats onto the battlefield. These bats aim for defenses (without triggering traps) and have limited health. Though having limited health, bats are extremely useful in air attack strategies.

Upgrading your Dark Spell Factory to level 5 will cost 2,500,000 elixirs and 6 days to complete.

Upgrading your town hall to level 10 gives you 10 new levels on Archer Queen, taking the total to 40. Without a well-upgraded Archer Queen, you won't stand a chance against other TH10s, especially in wars. Archer Queen is the key ingredient of Queen Walk attack strategy, which helps create a funnel for every other attack strategy.

I always recommend specifying one builder to Archer Queen so she can be upgraded to level 40 as soon as possible. You might want to opt-out of war during this period.

It is better to upgrade Archer Queen and Barbarian King together so you can use them both when they are maxed out. You will need patience and a lot of Dark Elixir to upgrade both of your heroes together. Keep attacking whenever you can.

We are done with our offense, so it's time to improve our defenses now. We have will start with the strongest defensive building in our base, the Inferno Tower. You have built your Inferno Tower, but they are level one right now and can be upgraded to level 3.

Each Inferno Tower will take a total of 7.5 million gold and 9 days to reach level 3. It's the right time to fill up your camps and start attacking.

X-Bows are the second strongest defense buildings in our base. Each X-Bow can be upgraded to level 4, requiring 4,000,000 gold and 6 days. X-Bows have an excellent range and are extremely useful in defending against Siege Machines.

Flame Flinger can attack your base without even entering the range of your defense buildings. X-Bows and Mortars are the only defenses that can target them at TH10. Work on your X-Bows to defend against intruders in a better way.

Air Defenses are extremely crucial in your defense against air attacks. Air attacks are very common at TH10. A lot of players use Lavaloon, Loonian, and Dragon attacks in order to annihilate fellow TH10s.

Each air defense gets a new level at TH10, costing 3,500,000 gold and 5 days to upgrade. Use all of your free builders on Air Defense and get them upgraded as soon as possible.

Air Sweepers get an extra level at TH10. Air Sweepers play a crucial part in defending your village against air intruders. Air Sweepers can change the direction of attacks, making the enemy's plan useless.

Wizard Towers are an important part of your village. Wizard Towers get two new levels at TH10. A Wizard Tower can target air and ground units with splash damage. You should work on your Wizard Towers if you want to defend better against Hogs and Miners.

Unlike Wizard Towers, your Bomb Towers can only target ground units. When destroyed, Bomb Towers explode like a giant bombs giving a lot of damage to nearby troops. You will need well-upgraded Bomb Towers to defend against Hybrid Hog-Miner attacks.

Cannons can only target ground units and have an average range with a high fire rate; this makes them less important than other defenses.

Mortars deal splash damage to ground troops and have a good range but low damage. A well-placed Mortar can play an important part in defending against GoWiWi or Witch-Slap attacks.

Resource buildings give only a small amount of resources, so they should be your last priority. Traps should always be upgraded after you are done with all other buildings.

You get nice-looking Lava Walls at TH10. Lava Walls will make your base look better, and they can also slow down the enemy. Lava Walls won't take long to upgrade as you can use both elixirs and gold on them.