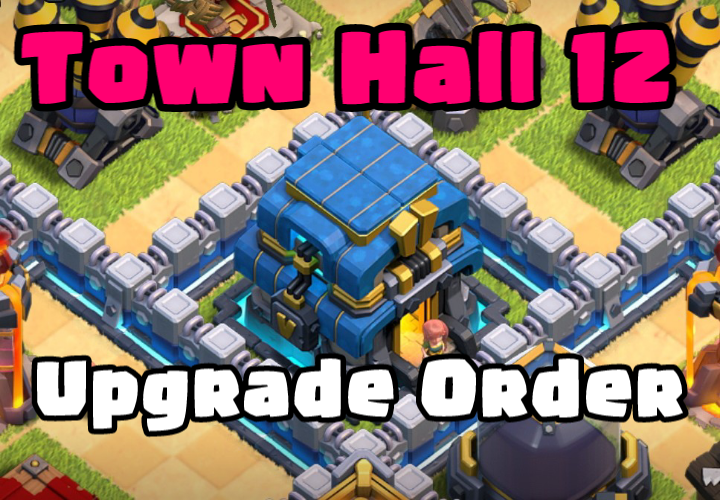 Many folks are unsure of what to upgrade first on their brand-new TH12. This article will teach you how to upgrade your TH12 properly, allowing you to advance more quickly. Town hall 12 is a pleasant milestone to achieve, bringing much more fun to the game, and with the proper upgrade order, you can speed things up in your base.

Every time you move into a new town hall, the laboratory should be at the top of your list of priorities. You will need stronger and better troops for farming, battle, and pushing, which the laboratory makes available. Elixir troops are an excellent place to start, and you should reserve your dark elixir for hero upgrades, which we will discuss in the guide.

At TH12, you get a brand new Workshop building, Inferno Tower, Hidden Tesla, and a couple of traps. I would recommend upgrading Inferno tower, hidden tesla, and traps to the current level of your older buildings. You should only use one builder on new buildings.

Each gold storage can be upgraded to level 13 at TH12, requiring 3,000,000 elixir and 6 days to upgrade. Use one builder to work on your gold storages so you can store a large amount of gold plus you are going to need them for upgrading defensive buildings.

The Workshop is a fantastic new building that unlocks at TH12. You can upgrade your workshop to level 3 to unlock Wall Wrecker, Battle Blimp, and Stone Slammer. If you have a generous clan, you might want to skip this upgrade and get one of those siege machines donated to you instead.

One of the most crucial offensive buildings in Clash of Clans is the Clan Castle. Your clan castle can be upgraded to level 8, which will increase the number of troop housing space from 35 to 40.

Clan Castle offers significant aid in both offense and defense.  You are going to need your clan castle for both wars, and for defending your loot as a new TH12.

As a TH12, upgrading barracks to level 14 will unleash Yeti. Yeti is a powerful troop for wars. Yeti is a vital troop in numerous attack strategies. I advise choosing just one builder to upgrade your barracks. Each barrack requires 5,000,000 elixir and 9 days to upgrade.

You can upgrade your dark barracks to level 9 at TH12 which will unlock Headhunter. This upgrade takes 7,500,000 elixir and 13 days to finish but it is worth the time.

The Headhunter is incredibly helpful and is utilized in nearly all attack strategies. Headhunter just has one task: eliminating enemy heroes and troops. She is light enough to leap over walls, and her poisoned weapons slow down the movement and attacks of her prey.

This expert mighty wizard looks for groups of ally troops to fight behind and support with his Life Aura and takes the form of a tower when defending. He can fly high or walk over walls while attacking, and he can make nearby troops immune to damage with his Eternal Tome ability!

Grand Warden gets a boost of 20 levels at TH12. You must specify one builder to your Grand Warden and take him to level 40 quickly as he is the key to winning attacks at TH12.

Despite having average health, Archer Queen is a master of her powerful weapon. She uses her Royal Cloak ability to conjure stealth and devastating damage when attacking, and she snipes opponents in her zone when defending.

Archer Queen gets 15 extra level upgrades at TH12 making her an absolute monster in both attacking and defending.

The Barbarian King is a monstrous threat who can take a huge amount of damage and derides anything in his way. He aggressively defends his zone, and once his Iron Fist ability is activated, he can attack with deadly wrath!

Barbarian King also gets a boost of 15 levels at TH12 making him no less than a tank on the enemy village. I would recommend specifying a builder for maxing out your Barbarian King as soon as possible.

TH12 has a destructive weapon of its own named Giga Tesla. Giga Tesla can wipe out chunks of enemy troops in seconds and deals a huge amount of death damage when destroyed. It is best to specify a builder to Giga Tesla so it can be upgraded to level 5 as early as possible.

Another effective defensive building in the game's primary defense is the Inferno Tower. When in single-target mode, Inferno Tower has the most damage output per second. You can upgrade each of your three Inferno Towers to level 6 at TH12. To better ward off invaders, level up your Inferno Towers whenever a builder is free.

The X-Bow fires mesmerizing bolts with deadly force. The X-Bow operates automatically after Elixir is loaded into it. It can be configured to target ground troops at great distances or all targets from shorter distances.

Each of your X-Bow can be upgraded to level 6 taking 10,500,000 gold and two weeks to upgrade. I recommend using just one builder on your X-Bows.

While lethal against flying foes, air defense is unable to target enemies on the ground. Carefully position it to cover as much airspace as you can. Each air defense can be upgraded to level 10, requiring 9,500,000 gold and 14 days to upgrade. Air defense should always be your highest priority after core defenses.

Hidden Teslas are the deadliest trap in Clash of Clans. Hidden Teslas can surprise both air and ground troops with their monstrous damage. You should work on your Hidden Teslas so that your base can defend better against attackers.

The Wizard Towers provide the best arcane defense! The wizards on the top of Wizard Towers can attack both air and ground units and are extremely potent to a large chunk of troops. Put some effort into your Wizard Towers and they will help you defend better.

Bomb Towers attack adjacent ground forces and explode when they are destroyed! Bomb Towers can help in defending against Hog and Miner attacks. Get them done and they will make a difference in the battle.

Cannons are an excellent tool for defending against ground attacks. Upgrade cannons to boost their firepower to get rid of ground units faster.

The splash damage from the Mortar's shell allows it to decimate massive numbers of attackers. Although, on the bottom of the priority list; Mortars are still a good defense. Mortars can help defend against Witch-Slap armies and some Siege Machines.

Gold mines, elixir collectors, and dark elixir drills can provide an extra amount of resources every few hours. You should work on them when you are done with all the defense upgrades on your base. All of the resource buildings can be maxed-out at TH12.

At this phase, you have come a long way. It's time to finish off the last few upgrades and then we can move on to TH13. Traps can help keep unwanted visitors off your lawn while walls can help in slowing down the enemy.