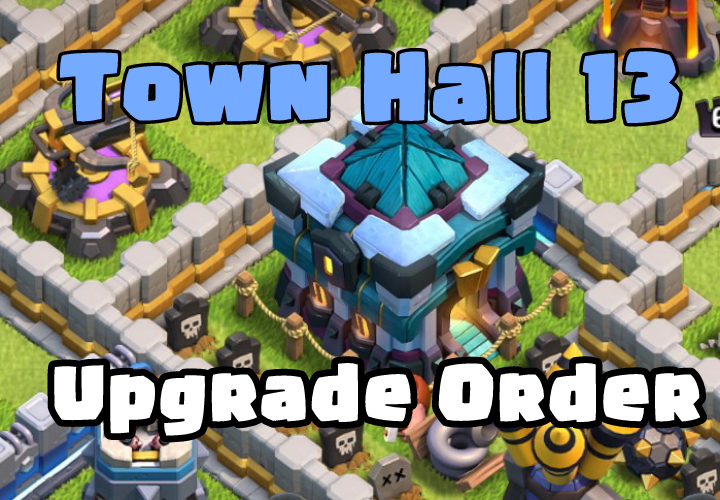 Reaching town hall 13 is a fun milestone to achieve. TH13 is the second last town hall and offers two upgrades for almost all defensive buildings. Upgrading your TH13 with the right priority guide helps you max out faster. I will try to guide you about the proper upgrade order you should use to progress more quickly as a TH13.

Note: We will be using five builders for upgrading our TH13s. If you have the sixth builder, use it for your wall upgrades. You can also use it to build all of the new buildings you get at TH13 and take them to the current level of the older buildings.

At TH13, you will need a lot of elixir for your troops, siege machines, and Grand Warden upgrades. Each elixir storage can be upgraded to level 14 at TH13, requiring 4,500,000 gold and nine days to upgrade. Use your second builder to work on all the elixir storages and sit tight as it will take a while.

Gold storages are also as crucial as Elixir storages. You will need a lot of gold to upgrade your defenses at TH13. Put some effort into your gold storages and max them out as soon as possible.

Royal Champion unlocks at TH13, and she is one of the most potent offenses in the game. You will love it in your battles but must wait it out first. When I upgraded to TH13, I didn't let my Royal Champion wake up for months. I kept her on the upgrade until she reached level 25. If you don't want to take her to level 25, upgrade her to level 5 so her ability is unlocked.

Archer Queen has always been on the top priority list of many veteran clashers. She has been used for making funnels into the enemy bases for quite a long time. A level 75 Archer Queen deals a lot of damage, and her ability is extremely powerful. I recommend keeping a builder busy on Archer Queen so she gets to level 75 as quickly as possible.

Grand Warden is a mighty powerful hero in Clash of Clans. Grand Warden's ability makes your troops invincible for a few seconds, and his ability is on the top of my hero's ability tier list. Grand Warden can be upgraded to level 50 at TH13 and consumes a lot of elixirs. Keep a builder busy on your Grand Warden, so he goes to level 50 as soon as possible.

Barbarian King is considered the strongest hero by the game itself. His consumption of dark elixir has made him bigger than any other troop in the game. Barbarian King at level 75 is no less than a giant damage-soaking machine. He provides a perfect tank to ground troops and deals a hefty amount of damage. Use one of your builders to upgrade Barbarian King to level 75 as quickly as possible.

Your clan castle can be upgraded to level 9 at town hall 13. Upgrading your clan castle increasing troop housing space to 45. Clan castle is an extremely important upgrade and should always be in your top priorities at every town hall level. Increasing five troops in housing space might not look a lot, but it can make a difference while attacking or defending. Clan castle now requires 16,000,000 elixirs and 18 days to upgrade.

Upgrading your barracks to level 15 gives you access to Dragon Riders. You can use Dragon Riders in multiple air attack strategies. Dragon Riders are used to wipe out essential defenses close to the edge of the bases, or you can pair them with ballons to charge right into the enemy base. I would recommend upgrading one barrack at a time.

We are done with our offense upgrades, and now it is time to work on our defenses. Giga Inferno is the brand new weapon that unlocks at town hall 13. It can burn enemy troops to ashes just in a few seconds. You can upgrade Giga Inferno four times, and its freeze spell bomb unlocks at level 13. It will take 34 days to upgrade your Giga Inferno to level 5, so I recommend keeping a building busy on your town hall.

At TH13, a fantastic new defense called Scattershot is unlocked. You will get two scattershots at town hall 13 that you can upgrade to level 2. Scattershots deal much damage, and you cannot ignore scattershots while attacking a base. At TH13 - TH14, you must plan your attacks according to the placement of Scattershots, Eagle Artillery, and Town Hall's Giga Inferno. It would be best to max out your scattershots as quickly as possible to get better in defense.

Eagle Artillery is the strongest defensive building in the game that covers the whole village with just a tiny no-fire zone. An attacker cannot ignore the position of Eagle Artillery while planning for the attack. You should upgrade your Eagle Artillery to level 4 as soon as possible, so your base defends better against all attacks.

X-Bows are one of the strongest core defenses of your village. A well-placed X-Bow can help you defend against multiple attack strategies, i.e, Queen Walks and Flame Flingers. You have 4 X-Bows at TH13, which can be upgraded twice. X-Bows will take a while to upgrade, so sit tight and keep farming on those dead bases.

Air defenses are top-tier air targeting defensive buildings. They can get rid of unwanted visitors in the skies of your village. Air defenses have a good range and greatly damage air troops, so you must work on them as quickly as possible.

Wizard towers deal splash damage and can become a nightmare for swarms of troops. A well-placed wizard tower helps you defend against bat spells, balloon attacks, or other swarms of both air and ground units.

Bomb towers are slightly less important than wizard towers as they cannot target air troops though you should still weigh them above other ground attacking defenses. Bomb towers can help defend against hog riders, miners, and other ground units.

Cannons can be upgraded twice at TH13. Cannons attack the ground unit with a lot of damage per second. Cannons have a high fire rate and are a great line of defense against ground attacks.

Mortar is a splash damage defensive building that can help you defend against multiple ground-based attack strategies. Mortars are most effective against Witch-Slap attacks. Mortars should be the last defense on your upgrade priority list.

Town hall 13 gives extra two levels to multiple defensive buildings, so it takes a lot of time to max out. If you had a sixth builder and you kept using your extra resources on your walls, you would be done with walls by now. Traps should be upgraded when you are done with everything else.