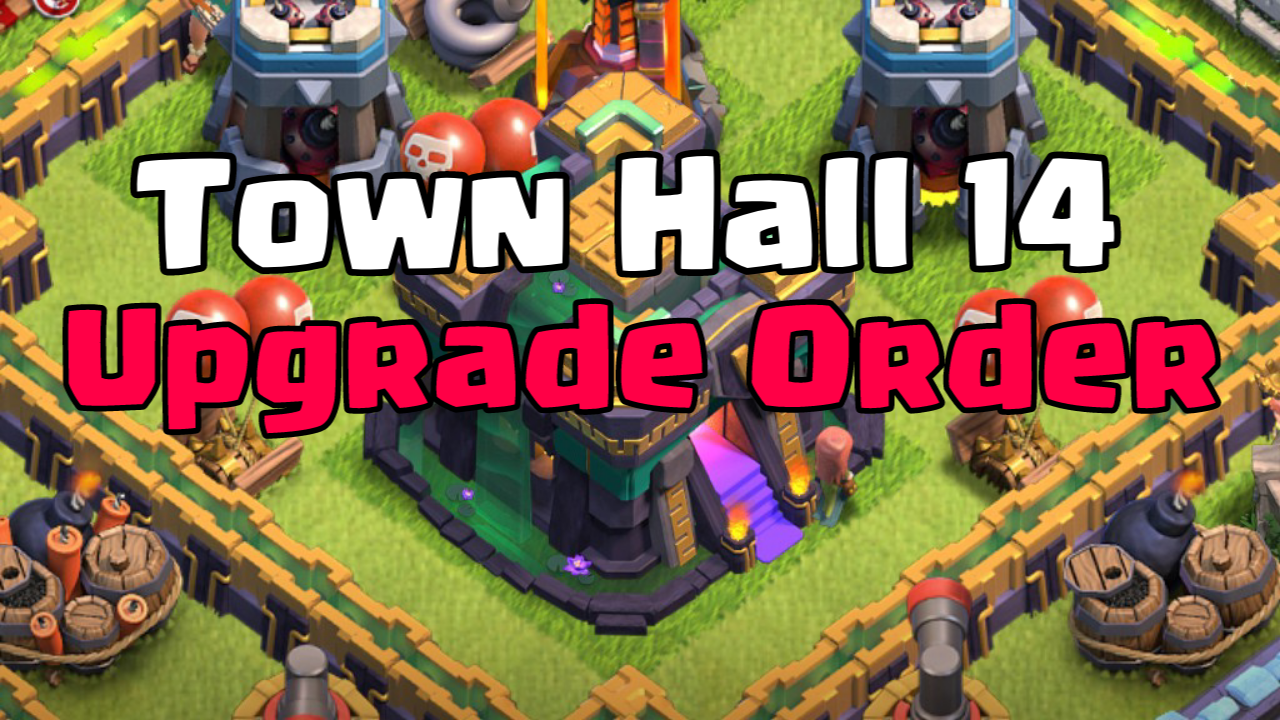 Town hall 14 is the second last town hall and upgrading it with a proper order helps with both farming and war. I will try to guide you about the appropriate upgrade order you should use at TH14.

The laboratory should always be the first upgrade in every town hall. It unlocks access to stronger and better troops that you will need for pushing, war, or farming. I recommend starting with elixir troops and saving your dark elixir for hero upgrades that are covered in the guide.

Pet house is another essential upgrade for town hall 14. It unlocks access to 4 different pets, one for every hero. You should keep a builder busy on the pet house and take it to level 4 as soon as possible. Pets help with your attack, whether pushing or playing clan wars. Pets also provide every good tank to heroes taking most of the initial damage.

Defense upgrades are pretty expensive at town hall 14. Get those gold storages to level 15 as soon as possible. You will need them for most of the defense upgrades. Keep a builder busy on your gold storages. If you are done with the laboratory, use that builder to upgrade another gold storage.

You will need plenty of elixir for your troops and Grand Warden. Use one of your builders to upgrade your elixir storages as quickly as possible. In the recent update, the clan castle upgrade was shifted from gold to elixir, so you might want to work on your elixir storages as early as possible as you will need clan castle troops for successful war attacks.

Upgrade dark elixir storage is extremely important at every town hall. Heroes, dark troops, and pets consume dark elixir. At town hall 14, you will need a lot of dark elixir to work on those dark elixir upgrades, so sit tight and keep clashing.

Note: You need to upgrade your storages to work on the rest of the upgrades. Keep your builders busy on storages for the next couple of weeks, so we don't worry about storage issues. We won't mention which builder to use anymore; only the proper upgrade order will be documented.

Clan castle troops help a lot with your war attacks and defences. Upgrading your clan castle to level 10 gives you an extra spell slot. This might not seem a lot, but it makes a difference in the battle. Sometimes an additional freeze or clone spell can do the job.

At TH14, you can unlock Flame Flinger in your workshop. Flame Flinger is an exciting new siege machine that can wipe out a lot of defense while staying out of the range of many defenses. You can skip this upgrade if your clan loves donating Siege Machines.

Your upgrade priority should always focus on offenses on every new town hall. Archer Queen is the strongest hero of them all. You are going to love queen walking with your level 80 Archer Queen. Keep a builder busy on her and take her to level 80 as soon as possible. You might want to opt-out of the wars for the next 40 days as each level takes 8 days.

Grand Warden is second on my personal hero tier list. You might think that half of the second increase of Grand Warden's ability doesn't look important, but it can make a difference during an attack. Get your old man to level 80, and you will love him in your attacks.

Royal Champion is an incredible new hero. She can jump over the walls and does a lot of damage. She recovers a lot of health and deals a good amount of damage when you pop her ability. Keep a builder busy on her for the next 40 days and get her to level 30.

Scattershot is a solid new defensive building. You get two scattershot at TH13 that can be upgraded to level 3 at TH14. You should max them out after you finish your Eagle Artillery. Scattershots are so stronger that attackers cannot ignore them while making an attack strategy. It would help if you always positioned your scattershots properly and not too close to Eagle Artillery.

Town Hall 14's Giga Inferno is a mighty defense. You should set a builder to work on TH14's Giga Inferno and take it to level 4 as soon as possible. TH14's poison bomb that explodes after destruction can wipe out many enemy troops. It takes 47 days to max out TH14's Giga Inferno. Let one of your builders work on the town hall for the next 47 days.

Inferno towers are one of the most robust defenses in the game. I rate them the third strongest defense after Eagle Artillery and Scattershot. Inferno tower in single target mode does 230 damage per second, the highest in the game. Put some effort into your Inferno towers, as they can help you defend quite well. You have 3 Inferno Towers at town hall 14, each taking 19 days to complete and requiring 19,000,000 gold for each upgrade.

X-Bows might not be the most vigorous defense in the game, but they do play their part when an enemy deploys their Siege Machines. X-Bows can get rid of those Flame Flingers trying to smash your defenses. X-Bows help a lot in defending against Queen Walk attacks too.

You should keep your X-Bows away from the wall and keep them deep inside your base. A well-placed X-Bow can change the outcome of an attack. X-Bows can be upgraded to level 9 at TH14, taking 18,500,000 gold and 19 days, so you might want to put on your farming boots.

Yeah, those homes for your builders can fight back now, and they are extremely helpful in defending. Builder huts can be upgraded to level 4 at the town hall 14, and each builder hut takes 36 days to max out and requires a total of 37500000 gold. You might want to sit tight and keep clashing whenever you are in your free time.

Air defenses are a nightmare for air troops at every town hall. A well-placed air defense can ruin multiple attack strategies. You have 4 air defenses at TH14 each takes 18,000,000 gold and 18 days to upgrade. Focus on your air defenses when you are done with the above-mentioned upgrades; your base's defense will improve significantly.

Archer towers are an excellent defense with a good range. They can target both air and ground units. A well-placed archer tower provides good coverage to nearby defense. Archer tower goes to level 14 at TH14 and requires 17 days to upgrade. You will have eight archer towers at TH14, so they will take a while to upgrade. Patience is the key to maxing out your town hall 14.

Wizard towers are a nightmare for bat spells and other swarms of troops. Wizard towers help defend against balloon parade attacks, so you should keep them spread around your base. Upgrade your wizard towers to make your base better and stronger.

Hidden Teslas are a great surprise for the attackers. Hidden teslas stay hidden until an enemy comes closer or when the base's destruction reaches 51 percent. Hidden tesla has a range of 7 tiles and can target both air and ground units. You can upgrade your Hidden Teslas to level 13, and each tesla requires 18,000,000 gold and 18 days to upgrade.

Cannons are a good defense against the ground units. They can help stop enemy wall-breakers and make a difference in many other ground attacks. It is recommended to keep your cannons close to the walls.

Mortars should be the last defense on your upgrade priority list. A well-placed mortar can help stop hordes of enemy troops and resource-stealing goblins. Mortars can also help defend against witch slap attacks if placed closer to the edges of the base.

We already mentioned on the top of the blog that you should keep your 6th builder busy on the walls; if you followed our advice, you would be done with walls by now, as maxing-out TH14 can take eight months or more. This concludes the guide. Let me know in the comments if I missed anything. Clash On!