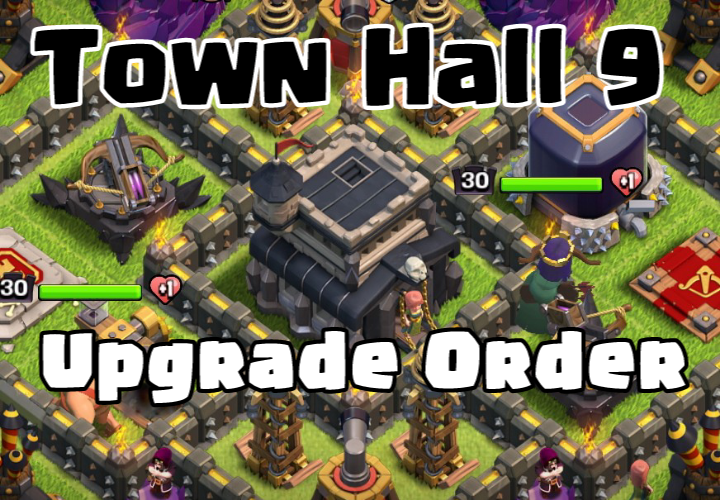 TH9 is an amazing Town Hall level that gives you access to Archer Queen and a brand new defense called X-Bow. The most asked question by new TH9 players is What should they upgrade first? This upgrade priority guide for TH9 will tell you the best order in which you should be upgrading your new TH9 so you can speed things up.

An upgrade priority guide teaches you the right order to upgrade your base. All of my priority guides start with offensive buildings. You should always be focusing on your offense first. Some buildings have a high priority than others due to their statistics.

This guide has the following purpose:

Getting the new buildings (Two Builders)

You get the following new buildings after upgrading your TH9:

That's a big list of new buildings, so it's recommended to use two builders on all of these buildings and make them the same level as the older buildings.

You should build Archer Queen right away, and as a new TH9, you will get a boost on her that will increase her level to 6 for the next 5 days. It is recommended to upgrade Archer Queen to level 5 after the boost ends.

You can upgrade your village's Laboratory to level 7 as a TH9. Level 7 Laboratory requires 800,000 elixirs and 1 day to upgrade. The laboratory is always a high-priority upgrade because it lets you upgrade your troops, making them stronger and better. You will need better troops in order to three-star fellow TH9s.

As a TH9, you can upgrade your Clan Castle to level 5. The upgrade costs 2,500,000 elixirs and requires two days to finish. A level 5 Clan Castle has a housing space of 30, so you can now request Golem, Lava Hound, or Electro Dragon.

As a TH9, you can upgrade your Army Camps to level 7, increasing the total troop housing capacity to 220. Use as many builders as you can on your Army Camps, so they can be upgraded quickly, giving you access to more troops.

An extra housing space of 20 can help you take on fellow TH9s in a better way. A maxed-out TH9 is hard to attack if you lack the extra troop housing space.

Dark Elixir storage gets two new levels at TH9 taking the total storage capacity to 180,000. These upgrades will require 2,000,000 and 3,000,000 elixirs, respectively, taking 5 days to complete. As a TH9, You will need a lot of Dark Elixir to upgrade your heroes, Dark Troops, and Dark Spells.

Compared to the Dragon, the Baby Dragon might be more flexible. They only have around half the housing space, health, and damage values, but they deal far more damage when angered.

Baby dragons are particularly skilled at directing troops toward the base's centre by eliminating the base's outer buildings. They have a healthy amount of health and have powerful temper outbursts.

This upgrade will cost 1,800,000 elixirs and 2d 12h to complete. You should upgrade only one Barrack at a time, so your troop training time isn't decreased drastically.

Your village's Dark Barracks can be upgraded twice at TH9 unlocking Witch and Lava Hound. Both of these troops are extremely necessary for good TH9 attacks.

When the Dark Barracks reach level 5, the Witch, a splash-damaging Dark Elixir troop in the Home Village, becomes available. The Witch summons the Skeletons, dead soldiers from previous battles, and fires blue projectiles at her victim. Each Witch can summon a limited number of Skeletons.

The Lava Hound is a low-damage, high-hitpoint-eating hell demon that unlocks at level 6 Dark Barracks. The Lava Hound is a ferocious canine creature with two tiny wings. Its body is covered with several solid rock plates, and lava seeps through every crack.

When killed, the Lava Hound explodes, dealing negligible damage to the surrounding area while producing many Lava Pups that will keep attacking nearby targets.

Thanks to the Jump Spell, your heroes and ground troops can now Jump over walls. Jump Spell can help you redirect your troops to the core of the enemy base. You can use Jumps Spells in any of the ground attack strategies.

The Freeze Spell can temporarily freeze Clan Castle troops, enemy defences, or heroes. Freeze Spell takes only one housing space and is used in almost all types of attacks. You should unlock both of these spells as soon as possible.

The Skeleton Spell summons numerous Skeletons on the battlefield when it is cast. Despite having low hit points and damage per second, these Skeletons can be used as a distraction.

If you followed the guide, your Archer Queen would be level 5 by now, as mentioned at the start of the article. We need to get her to level 30 now. Well-upgraded Archer Queen is extremely necessary at TH9; otherwise, you will have a hard time attacking well-designed and maxed-out TH9 bases.

A well-upgraded Archer Queen can create a good funnel for other troops by coupling her up with a few healers. The famous Queen Walk strategy is fun and necessary to learn.

If you max out your TH8, you will have a level 10 Barbarian King. We get 20 new levels on Barbarian King as a TH9. We need to take him to level 30 to get better with our war attacks. A level 30 Barbarian King is an absolute menace for enemy defences and takes a lot of firepowers to kill.

It is highly recommended to upgrade Archer Queen and Barbarian King together. It might look hard, but it isn't. Make an attack or two whenever you have free time, and you will have plenty of Dark Elixir to fund both of your heroes.

You can have level 3 X-Bows as a TH9. X-Bows are the strongest core defence at TH9. These arrow-firing defences have a huge range and deal great damage. X-Bows can be set to target ground troops at a larger range, or both (air and ground troops) at a smaller range.

Dragon and Lava Hound attacks are pretty common at TH9. Level 7 Air Defenses can help you in defending against these attacks. The upgrade costs 1,750,000 gold and 3 days for each Air Defense.

Archer Towers are a good first line of defense against both air and ground units. They have the ability to target any type of troop with a very good range and high fire rate.

Hidden Teslas are traps that deal much damage with their high fire rate. They can make a bunch of troops disappear in seconds. Hidden Teslas can target both air and ground units giving them a higher priority than other defenses.

The wizard on a Wizard Tower can target both air and ground units with splash damage making this defense a higher priority defense than other ground attacking defenses.

Bomb Towers deal a lot of death damage and average damage per second. Bomb Towers are an absolute nightmare for hog attacks. Put some effort in your Bomb Towers to defend against those Hog Riders.

Cannons can only target ground units with no special perks making them a lesser important defense building. However, you cannot ignore their part in defending your village against ground attacks.

Traps can get rid of intruders in the blink of an eye. I would recommend starting with Seeking Air Mines and Air Bombs.

You will get two new levels of walls as TH9. The major function of the Walls is to delay advancing ground troops, allowing defenses to inflict damage and kill attackers as they try to break the Walls.