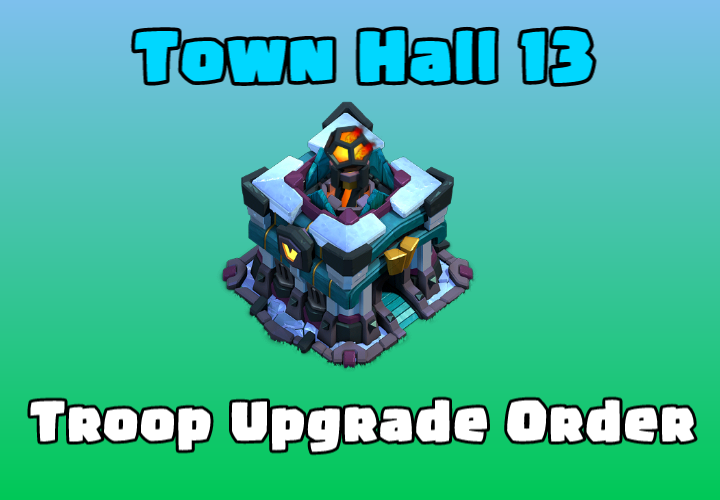 Many Clash of Clans players wonder what troop to upgrade first after upgrading their Town Halls. This extensive article will cover troop order for Town Hall 13. As a TH13, you must know the proper upgrade order for your troops to succeed in wars.

Note: Siege Machines should be your last priority if you are in a good generous clan that likes to donate. They are a waste of resources and time if your clan members can donate them to you.

Luckily, there are no new levels for Barbarians and Goblins at Town Hall 13. You can turn any one of them to Super Troop to farm resources. I would recommend using Super Barbarians because they won't let you drop in trophies when using them.

Electro Dragon is an extreme beast, and even after multiple nerf, this troop still dominates top attack strategies. Electro Dragon deals chain damage to numerous targets, reducing its damage on every jump. Electro Dragon has a good amount of health and deals tons of damage.

Electro Dragon gets one new level at TH13, taking it to level 4. This upgrade is going to cost 16,000,000 elixirs and 16 days to upgrade. Electron Dragon should be your priority as a TH13 because it is easy to use and can be used on almost any base type.

The Healer has been a key ingredient of Queen Charge attacks for years. The healer is one of the troops that still gets used even after many nerfs. A well-upgraded Healer will help keep your Queen alive, so you should upgrade it as soon as possible.

The upgrade will cost 13,000,000 elixirs and 14 days to complete. Hit a few research potions to speed things up.

Yeti is a strong defense and offense troop. Yeti is a splash-damage troop that deploys Yetimites. Yeti deals a lot of damage, and if used properly, it is one of the most useful troops in the game. Yeti gets a new level at Town Hall 13, which costs 15,000,000 elixirs and 16 days to complete.

Yeti has above-average health and deals a good amount of damage which makes him a good troop for creating a funnel. Yetimites deployed by Yeti have a decent amount of health which makes them good for distracting defenses.

Hog Rider and Miner are the current meta of the game. They will be getting nerfed in the next October update, so we will keep them a little down on the list. Hog Rider is still a high-priority troop because of their recent buffs. Upgrading your Hog Rider will cost 280,000 Dark Elixirs and 16 days to upgrade.

As mentioned above, Miners are being widely teamed up with Hog Riders right now. You should upgrade your Miner right after Hog Rider because these troops work great together. The Miner can be upgraded to level 7 as a Town Hall 13. This upgrade will cost 13,000,000 elixirs and 15d 12h to complete.

Balloon has always been a high-priority troop at every Town Hall level. You can throw them into any attack strategy, and they will produce good results. Balloons can be used to clean up extra defenses on the edges of the base, or they can be used as Air Bomb tanks for healers or other air troops.

Balloon can be upgraded to level 9 at Town Hall 13, costing 14,000,000 elixirs and 16 days to upgrade. You should work on them as soon as possible to unlock better-attacking tactics.

Lava Hound used to be the highest priority troop in the past because of its usefulness at lower Town Hall levels; then, it went down the priority list because of the nerfs. Lava Hound was buffed in recent updates and is back in the game now.

Lava Hound can be maxed at Town Hall 13. This upgrade costs 270,000 Dark Elixirs and takes 16 days to complete. You should upgrade your Lava Hound to handle other Town Hall 13s with your LavaLoon attacks.

Headhunter likes to engage enemy Heroes, making her extremely useful in every attack strategy. They can be used to take out enemy heroes as the first step of your attack. The HeadHunter's cards activate a poison spell effect which slows down their target.

Headhunter can be maxed out at Town Hall 13, costing 240,000 Dark Elixirs and 16 days in total. Just like Lava Hound, Headhunter is a good Clan Castle troop. It is used to slow down attackers.

Dragon is one of the oldest troops in the game and has been used for years in multiple attack strategies. Dragon received a lot of buffs in recent updates, which increased their upgrade priority points. Dragon is extremely easy to use and is the right troop for you if you are not very good at hybrid attack strategies.

Dragon gets a new level at Town Hall 13 that costs 15,000,000 elixirs and 16 days to complete. Dragons are currently widely used by Town Hall 13 players, and you should upgrade them as soon as possible.

Dragon Rider can be teamed up with Dragons to get the best results out of your attack strategy. Unlike normal Dragon, Dragon Rider chooses to go for defense building. Dragon Rider has good health and deals a heavy amount of damage too.

Dragon Riders are used in multiple attack strategies with both normal Dragons and Electro Dragons. You should work on your Dragon Rider after upgrading the normal Dragon. Level 2 Dragon Rider costs 16,000,000 elixirs and 15 days to upgrade.

Invisibility Spell is an extremely useful elixir spell that can be used in any attack strategy. Invisibility Spells can make everything invisible within a radius for a few seconds. Though hard to execute properly, every Clash of Clans player should learn to use this spell.

Clone Spell is another widely used spell in Clash of Clans. This spell can multiply the units within its radius. Clone Spell costs 12,000,000 elixirs and 15 days to upgrade.

Bowler is a splash-damage troop and can be teamed up with other ground troops to produce good results. The Bowler throws a boulder that can target multiple defenses. Bowler gets a new level at Town Hall 13 that costs 280,000 Dark Elixirs and takes 14d 12h to complete.

The good old Golem gets a new level at Town Hall 13. You can use a Golem in any ground strategy you like. Golems can be used to distract defenses and have massive health. On death, a Golem deploys Golemites that are mini Golems with a fair amount of health.

The Poison Spell is a high-priority dark spell. Due to it being able to be used in any attack strategy, it has a higher upgrade priority. Poison Spell gets a new level at Town Hall that costs 260,000 Dark Elixirs and 15d 12h to complete.

PEKKA can be maxed out at Town Hall 13. PEKKA has always been used in a lot of different attacking strategies. PEKKA's upgrade priority increased recently because of the buffs she received in recent updates. This upgrade costs 14,000,000 elixirs and takes 15 days to complete.

With the addition of the Siege Machines, Wall Breaker's upgrade priority went a little down. You can still move him two steps up if you want. You can upgrade Wall Breaker before Poison Spell if you want to. This upgrade will cost you 13,000,000 elixirs and 14d 12h.

Wizard is a good funnel-creating troop. It can be used to clean up the extra buildings on the edges of the base before you initiate your war attack. Wizard deals a heavy amount of damage. If you plan on using Super Wizards in your war attacks, you can move Wizards up in your priority list and upgrade them right after you are done with the Invisibility Spell.

Another good troop for creating a funnel. Baby Dragons are widely used in Clan Castles to defend the base or to clean up the extra buildings on the edges of war bases. Baby Dragon will cost you 12,000,000 elixirs and 2 weeks to upgrade.

Minion is a good clean-up troop used in multiple attack strategies like LavaLoonian or Dragion. Minion can be used to clean up the base on time when all of the defenses are already down. This upgrade costs 250,000 Dark Elixir and 15d 12h to complete.

Valkyrie has dropped heavily in the upgrade priority list due to its poor health. Valkyrie isn't used much in the game right now. You should upgrade them after you are done with the important troops.

You are able to request the desired Siege Machine you want to use, so that is why they are on the bottom of the upgrade priority list. Upgrade whatever Siege Machines you like the most. All of them work great.

Jump Spell can be maxed out at Town Hall 13. The reason for Jump Spell being so down on the priority list is the inclusion of the Siege Machines in the game. Jump Spell would be a waste of spell space if you have a wall-wrecking Siege Machine in your army. Jump Spell costs 12,000,000 elixirs and takes 15 days to upgrade.

Healing Spell gets to its max level at Town Hall 13. Upgrading your healing spell to level 8 costs 14,000,000 elixirs and 16 days to complete.

Skeleton Spell, too can be maxed out at Town Hall 13. This upgrade costs 250,000 elixirs and takes 15 days to complete.

After we are done with everything, it's time to work on our poor old Giants. This upgrade costs 13,000,000 elixirs and takes 15 days to complete.