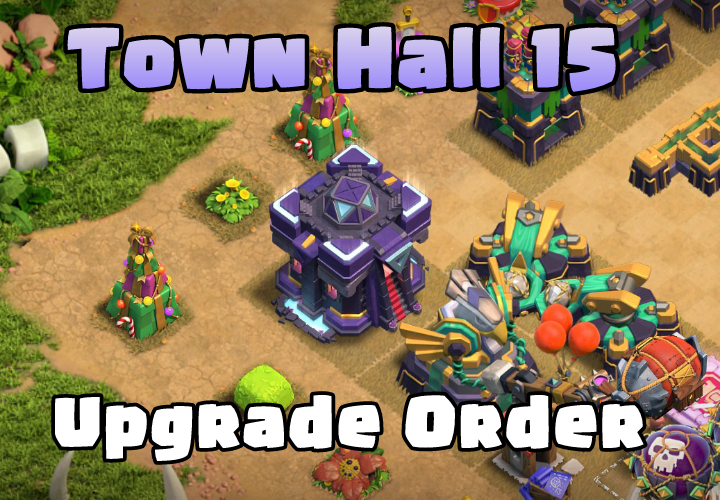 Town Hall 15 was released a while ago, and many players have already upgraded to the new Town Hall level. If you are one of those players, you might wonder what to upgrade first. Town Hall 15 adds three new defensive buildings to the village. You will be getting two Spell Towers and a Monolith as a TH15.

That's not all; Town Hall 15 brings a new spell and a new troop. Electro Titan and Recall Spell were added to the game with the addition of TH15. Additionally, you will get 20 extra troop housing spaces after upgrading your army camps and an additional five housing space in your Clan Castle on upgrade. Let's head to the upgrade order now.

Let's start with the good old Laboratory that has always been our top priority at every Town Hall level. You should upgrade your Laboratory right away if you have a book of building. The new Laboratory will give you access to more potent and better troop levels.

Clash of Clans has reduced the amount of Barracks to one. You have only one Barrack in your base, so now you don't need to worry about upgrading all the Barracks. You should use your second builder to unlock the new Electro Titan. Electron Titan is a new promising troop that might help you to take on fellow Town Hall 15s in a better way.

We will need that new Recall Spell to put on a fight against those new defensive buildings. Recall Spell is an amazing new spell that can be used with any attack strategy. This new spell is a "must-have" spell, and you should use a builder to unlock it as soon as you are done upgrading to TH15.

Recall Spell can remove troops or Heroes from the enemy village, letting you redeploy them wherever you like. This new spell will bring whole new attack strategies and add many more tactics to the game.

You should not upgrade these new buildings for now. We will work on them later in the guide. Building these new defenses will buff your village's defense by a good percentage. You should not skip this one if you like wars or you are in the legend league.

Town Hall 15 brings new army camps level, increasing your total troop housing capacity to 320. It is recommended to upgrade two army camps at a time if one of your builders is free from the above-mentioned upgrades.

Town Hall 15 adds a new Clan Castle level to your village. The upgrade costs 20m elixir and takes 20 days to complete. Put a builder on your Clan Castle, so you get those extra five spaces when requesting troops. Clan Castle is a high-priority upgrade because it helps attack and defend.

You will need a lot of Elixirs to upgrade your Grand Warden, Troops, and Pet House. Get your storages ready, so you have enough storage capacity for upgrading the Pet House.

Note: You should skip all of the storage upgrades (including Gold and Dark Elixir Storage) if you have a gold pass.

Pet House gets 4 new levels at Town Hall 15, giving you access to four new pets. You should specify one builder for your Pet House to take it to level 8 as soon as possible. The following Pets will be unlocked after each upgrade of Pet House:

You can finally replace L.A.S.S.I and Electro Owl with something better😉. I already gemmed my Pet House to level 8, and I love Frosty and Phoenix.

Siege Workshop gets a new level at Town Hall 15 that unlocks the new Battle Drill. This new Siege Machine drills through the ground like Miners avoiding all the damage and walls. Battle Drill stuns its target for 2 seconds which can be used to reset single-target Inferno Towers.

Note: This upgrade can be skipped if you have a generous clan. You should request the Battle Drill instead.

We will need a lot of Dark Elixir for those new hero levels. Use your sixth builder to work on your Dark Elixir storage, so we don't run out of storage capacity when upgrading the Monolith.

It's time to work on our defenses now. Monolith is added to the game with Town Hall 15. This new defensive building is stronger than Inferno Towers. Monolith is a nightmare for high HP troops. It deals a fraction of damage to the total health of its target.

Monolith takes Dark Elixir to upgrade, and you will need an upgraded Dark Elixir storage to take it to level 2.

We will need an increased storage capacity to work on the new upgrade. Put all of your builders on Gold Storage upgrades so we can store enough gold for upgrading our defenses. Again, you should skip this upgrade if you have a gold pass.

You should specify two builders for the hero upgrades. Heroes are the key to winning attacks at every Town Hall level. Each hero got 5 new upgrade levels at Town Hall 15. You cannot rate any Hero above the other. All of the heroes are extremely useful, and you should upgrade them together instead of taking one hero to the maximum level at a time.

Let's work on these amazing new defense buildings now. I would put Spell Tower on top of my defense-building tier list. Spell Tower allows you to select three different spells: Invisibility Spell, Rage Spell, and Poison Spell. Let one of your builders upgrade your Spell Towers to give you a huge defense buff.

Spell Towers will change the way anyone attacks a village. You cannot ignore the placement of the Spell Tower while attacking Town Hall 15. You will need a lot more planning now to three-star a Town Hall 15.

Town Hall 15 got no new signature weapon. Instead, it will use Town Hall 14's Giga Inferno. Upgrading your Town Hall's Giga Inferno will increase its range and damage. Giga Inferno is one of the strongest defenses in the game, so you should upgrade it as soon as possible.

X-Bow is another high-priority defensive building because of its range and the damage it deals. X-Bow has a huge range when set to ground mode.

Being the main aerial defense building, Air Defense always gets a new level at every Town Hall. Upgrade your Air Defenses to defend better against those upgraded Town Hall 15 troops.

Archer Towers got a new level at Town Hall 15. Archer Towers can target air and ground units, making them a high-priority upgrade. Put some effort into your Archer Towers to defend better against fellow TH15s.

Bomb Tower does a huge amount of death damage when destroyed. Bomb Towers are an absolute nightmare for Hybrid attack strategies. We get a new Bomb Tower level at TH15, giving them a nice magical look.

Cannons also get a new level at Town Hall 15, taking their total level to 21. With the addition of the new Electro Titan troop, cannons might climb up the upgrade priority list in the future because they deal a good amount of damage and have a fair attack rate.

Mortar can now be upgraded to level 15 at TH15. Mortars don't make a lot of difference in defending your village though they can be used to counter Siege Machine when placed closer to the edges of the base.

That's all we have for TH15 yet. This upgrade order guide might change with the addition of new building levels. Clash On!